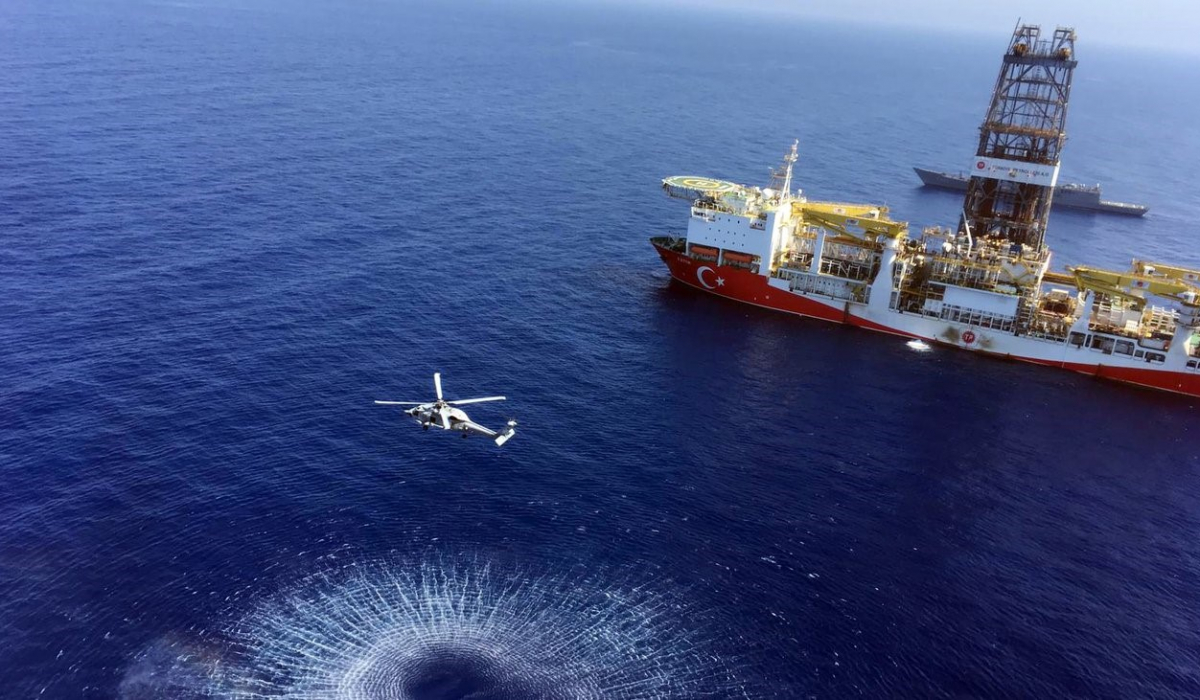 Emerging hydrocarbon discoveries in the eastern Mediterranean unravel political and economic opportunities for the region’s states. The region that is commonly known as the ‘Levantine Basin’ (figure 1) is believed to be floating around excessive amounts of gas reserves. According to an assessment carried out by the United States Geological Survey (USGS) in 2010,[1] the Levantine Basin holds around 122 trillion cubic feet of recoverable gas.

Various regional and international companies are licensed by states that are situated on the Levantine Basin for the purpose of exploring and excavating gas. Although the search for gas fields is not an easy mission, their discovery can unlock significant economic potential. Yet developing the means to explore gas fields is not the only challenge that states might encounter. Gas fields might be located within a disputed territory, thus constituting an obstacle against the state’s capacity to generate advantages.

To illustrate, the case of the Cyprus-Turkey gas dispute serves as a good example. Cyprus, which serves as the smallest country in the Mediterranean’s east, is divided between the Republic of Cyprus (RoC) and the self-declared Turkish Republic of Northern Cyprus, which is only recognized by Turkey as a state.[2] Both sides claim ethnic origins to the island country in which the United Nations maintains a buffer zone that separates them two.[3] Despite the initiatives that were made to address the territorial dispute in Cyprus, uncertainty remains looming about any serious changes in the current status quo. The dispute between the two countries continues to overshadow the island country’s potential to generate income. With that being said, this piece intends to discuss gas discoveries in the Levantine Basin and examine the Cyprus-Turkey gas dispute. 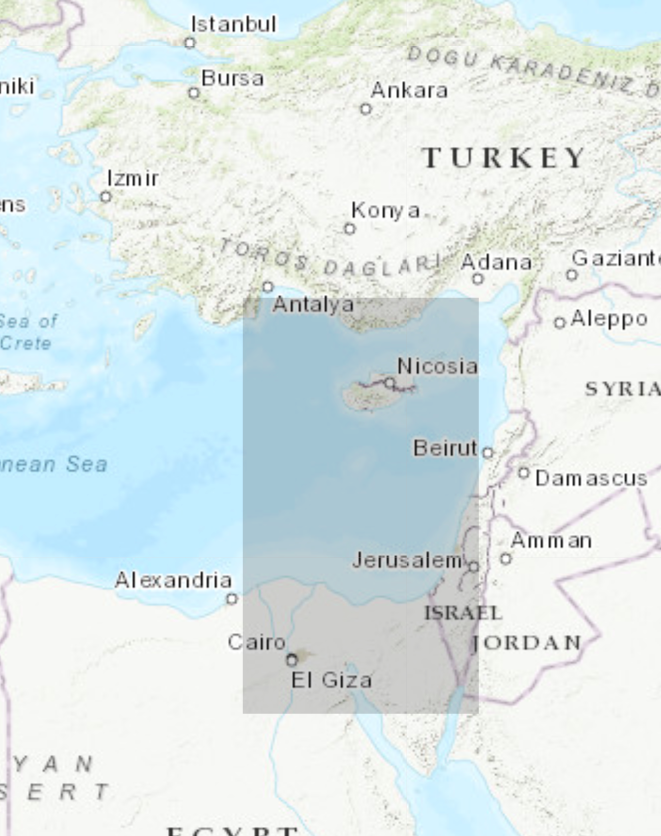 The RoC granted the Texas-based Noble Energy a license for conducting explorations in its Exclusive Economic Zone[5] EEZ in October 2008.[6] The licensed-vessels were intercepted by the Turkish Navy and were asked to leave, claiming that they were operating in areas that fall under the Turkish jurisdiction.[7] Following this period, Turkey delineated its maritime zones with Northern Cyprus with the latter granting the Turkish National Gas Company (TPAO) to explore in areas that fall within RoC’s EEZ.[8] Later in December 2011, Noble Energy announced the discovery of the Aphrodite gas field which is believed to hold around 4.1 trillion cubic feet of gas.[9] This discovery marked a significant step in the RoC’s struggle to materialize gas production in the Mediterranean. Despite this, Ankara continued to harass vessels that conducted gas-operations in Cyprus’ offshores.[10]

Gas discoveries in the eastern Mediterranean expanded in different areas and were not limited to the Aphrodite field. In Egypt, for example, the Zohr gas field was discovered in 2015 by the Italian energy company Eli and is believed to hold around 30 trillion cubic feet of gas thus making it the biggest gas discovery in the Mediterranean.[11] Notably, the Levantine Basin’s main gas fields are concentrated in the offshores that fall between Egypt, Cyprus and Israel, as illustrated in table 1 bellow. While countries like Egypt and Israel have demarcated their maritime borders and therefore are not challenged to extract from their discovered gas fields, other countries, such as Cyprus, are strangled as a result of the contested maritime borders with Turkey (figure 2). 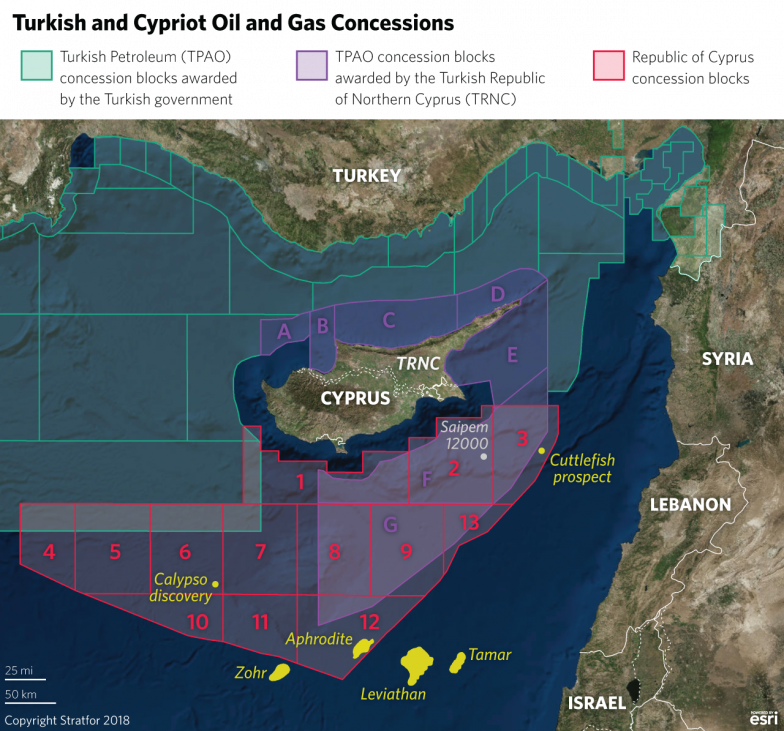 The situation further deteriorated between both Turkey and Cyprus after ExxonMobil and its partner Qatar Petroleum announced that they found encouraging results in the south of Cyprus in February 2019.[14] Both companies have been working in that area since November 2018 and their discovery is expected to contain between five to eight trillion cubic of gas,[15] thus situating the field as having higher reserves than the Aphrodite field. RoC's energy minister Georgios Lakkotrypis stated that “this is the biggest discovery so far in Cyprus' EEZ and, based on official data, one of the biggest worldwide in the last two years.”[16] The RoC claims that the Turkish Cypriot's share of the gas revenues will be held in escrow until a solution to the division of the island is reached.[17] Turkey, on the other hand, promised to continue its gas drilling in the island's offshore, prompting the European Union and the United States to express their 'concern'. Turkish President Erdogan contends that the Turkish Cypriots have equal rights to the island’s resources claiming that “We will not stop searching for hydrocarbons in the eastern Mediterranean simply because the Greek Cypriots do not want it.”[18]

While the RoC demarcated its maritime borders with Egypt, Lebanon and Israel, Ankara doesn't recognize any border agreements made by Cyprus. As Turkish foreign minister Mevlut Cavusoglu announced “Turkey does not recognize the unilateral and illegitimate exclusive economic zone claims of the Greek Cypriots (..) third parties should refrain in taking sides in overlapping maritime boundary claims and they should not act as if they are in a court in rendering judgment on bilateral maritime boundaries.”[19] For Ankara, Turkish Cypriots should be represented in any negotiations that concern the island country’s delineation of maritime boundaries. And as Turkish Cypriots didn’t participate in demarcating boundaries, the RoC’s maritime borders are non-existent for Ankara. It is also important to take into consideration that Turkey is not a signatory to the United Nations Convention on the Law of the Sea.

Turkey’s gas discoveries are not extensive despite its attempts to expand its scope of explorations into the RoC’s EEZ. Ankara remains determined to pursue explorations in that area as long as cooperation between both sides in Cyprus is absent. As such, Turkey is situated within very limited options particularly that other actors in the region such as Egypt, Cyprus, Greece and Israel are consolidating their cooperation through establishing a ‘regional energy architecture’ that will exclude Turkey from the Levantine Basin gas market.[20] Such cooperation can allow gas to transfer from the Levantine Basin to Europe thus bypassing Turkish and Russian pipelines.[21] In order to impede the flow of cooperation between such countries, Ankara continues to dispatch its vessels to explore in the areas that resemble the cornerstone of any future gas projects in the Levantine Basin.

Turkish actions created cases of discontent amongst regional as well as European countries. The Egyptian foreign ministry threatened that Turkey would be confronted if the latter does not respect Egypt's rights for the gas exploration deals with Greece and Cyprus.[22] In addition, the European Union has decided to impose some sanctions on Turkey in an attempt to protect the RoC's excavation in its own EEZ. The sanctions were decided in July 2019 and aimed at reducing the EU's pre-accession assistance to Turkey for 2020 by €145.8 million.[23] The Turkish foreign ministry responded by stating that the EU moves “will not affect in the slightest our country's determination to continue hydrocarbon activities in the Eastern Mediterranean (..) [this] showed how biased and partisan the EU is on the subject of Cyprus.”[24] While EU leaders continue to express their solidarity with Cyprus as French President Macron reiterated “Turkey must stop its illegal activities in Cyprus's exclusive economic zone”[25], the Brussels International Center believes that their response remains inadequate to formulate an integral way out of the dispute.

To conclude, the previous ten years witnessed rapid discoveries of hydrocarbon fields in the Levantine Basin. While gas discoveries can unlock significant economic potential, they can also exacerbate divisions amongst countries. This piece shed a light on the gas dispute between Turkey and Cyprus and how it limits any economic progress and facilitates the spread of tension in the region. While Cyprus made remarkable advances in the course of discovering gas fields in the Levantine Basin, Ankara continues to undermine Cypriot aspirations through dispatching its vessels in the RoC’s EEZ. Although Turkey’s actions prompted regional and international countries to take measures in an attempt to halt Turkey, Ankara remains determined to control a significant share of the region’s gas thus disregarding all international calls for restraint.

[11] “Eni Discovers a Supergiant Gas Field in the Egyptian Offshore, the Largest Ever Found in the Mediterranean Sea,” August 30, 2015, https://www.eni.com:443/en_IT/media/2015/08/eni-discovers-a-supergiant-gas-field-in-the-egyptian-offshore-the-largest-ever-found-in-the-mediterranean-sea.

[19] Helena Smith, “Turkey Insists on Right to Drill for Energy Reserves off Cyprus,” The Guardian, May 20, 2019, sec. World news, https://www.theguardian.com/world/2019/may/20/turkey-insists-on-right-to-drill-for-energy-reserves-off-cyprus. 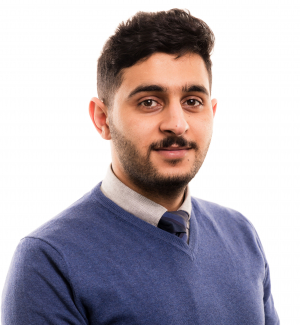