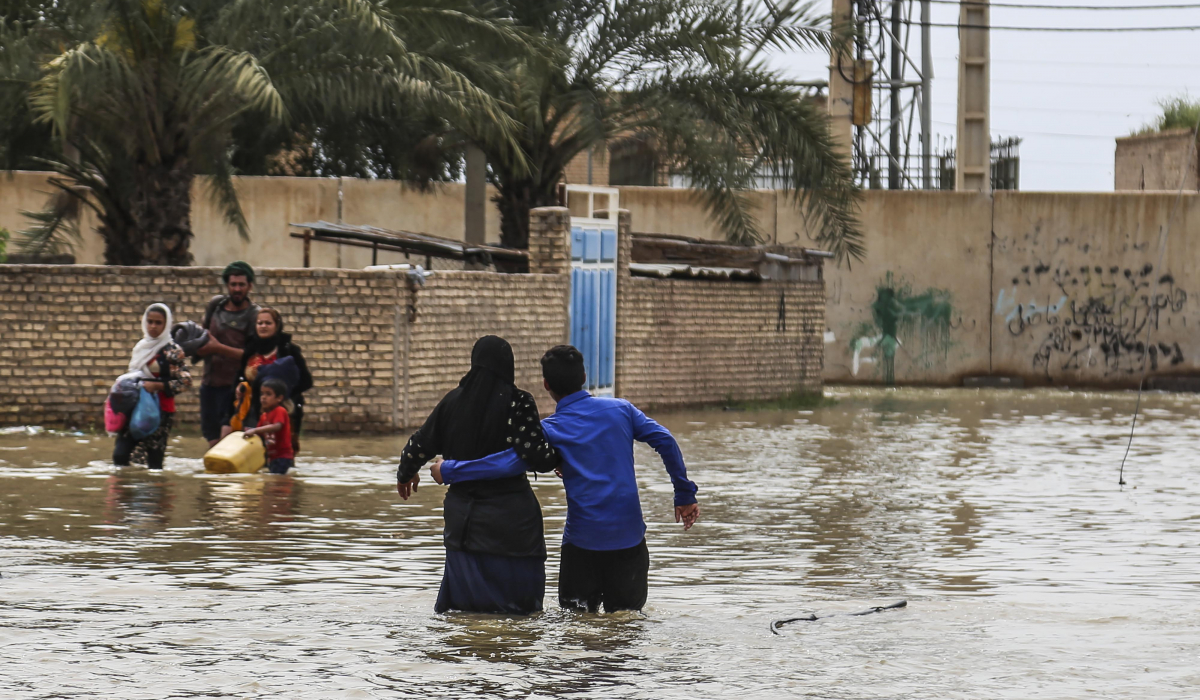 For past decades Iran has been suffering from an environmental crisis as a result of inefficient water and natural resources management and lack of enforcement of existing environmental regulations. This has led to constant drought-related water shortages and flooding throughout the country. The Iranian authorities, on their side, are blaming climate change and instrumentalizing their international sanctions as a justification for this crisis.

Given the fragility of Iran’s environment and its vulnerability to droughts, especially due to its topography, it is evident that climate change has a destructive effect on the country. However, there is a huge lack of policy-related solutions to curb these impacts, as the Iranian regime regards the issue as temporary. Along these lines, while the water shortage and flooding issues are urgent, political mismanagement by the Iranian regime has had an amplified effect in the local communities. If this trend continues, migration will likely increase, not only to the already overcrowded cities in Iran, but also to European countries.

Climate Refugees in Iran and its Consequences Abroad

Since May, flood has destroyed hundreds of Iranian towns and villages. It started on the northern region and gradually spread to most of Iranian territory. Currently, while the rest of Iran is gradually recovering from the recent floods, in the south-west, particularly in the province of Khuzestan, local population are still exposed to the continued effects of this phenomenon. As a result, many people have already emigrated to other provinces, increasing the ecosystem stress in those regions as well as causing human conflict.

In a historical perspective, after the 1979 Islamic Revolution, Iran was one source of refugees for different reasons. Firstly, at the early years of new Islamic Republic, refugees were mostly political activists who were escaping the brutality of the revolutionary courts. The second wave took place during the Iran- Iraq war[1]. Finally, displacement was due to conflicts and instability in neighboring countries such as Afghanistan, Iraq and Syria. Still, the Iranian refugees and the reason behind their displacement did not receive enough attention until now.

Currently, the reality on the ground shows that there are fundamental problems that would increase the migration flow from Iran, not only because of political or economic reason but also due to ever-lasting environmental crisis. Two factors illustrate this, starting from water and resources mismanagement all the way to the inefficient use of dams as a method of water control.

An example to illustrate this reality can be observed in the south-western region of Iran, where an incident with the Gutvand dam drawn 41 villages[2]. During and after this episode, the local population did not receive sufficient support and compensation. As a result, most of the villagers had to flee to the suburbs of cities, such as in the province of Khuzestan, Isfahan.  Looking into the geographic expansion during the 2018 uprising in Iran, these villagers were mostly living in shanty town and small settlements.

Another example took place in the small city of Izeh, in province of Khuzestan. During the 2018 protests, two people were killed, and the Iranian authorities lost control of the town for two days. Around 10.000 emigrants were living in this area due to the Gutvand dam incident.[3]

It could be observed, that the regions which are environmentally damaged and neglected are mostly inhabited by the ethnic or religious minorities. For instance, drying out of Lake Oromia in Azerbaijan (inhabited by Turks and Kurds) and Hamoon Lake in Baluchistan (initiated by Baluchis) had enormous negative effects on the social order, health and agriculture of those regions.

These instances of internal misplacement have affected the host cities in negative ways. For instance, the shanty towns suffer from lack of services, pollution and stress over infrastructure, with a markedly low quality of living for their inhabitants. In addition, there is a high rate of unemployment among its occupants. In July 2018, Abbas Akhundi, Iranian Minister of Roads and Urban Development announced that 19 million or 40 percent of Iranian population live in shanty towns[4]. Most of the inhabitants of these settlements are people who have originally left their villages to go and live in cities.

In a recent flood, the Crisis Management Organization announced that the total financial loss until 7 April 2019 was of 1 billion USD. To understand the extent to which this figure has impacted the Iranian economy, this amount represents 14% of Iran`s oil revenue (before sanctions), 5% of the general government budget and about half of the total health budget[5]. Until now, more than half a million of the 5 million inhabitants on the most affected provinces have been displaced and lost homes and livelihoods in the floods.[6]

The issue of Water Mismanagement in Iran and its Neighbors

Climate crisis such as drought, flood and sand storms was already the reason behind the boost in displacement to overcrowded cities, which have created additional pressures on infrastructure and resources. Overall, Iran is considered a safe and stable country, with ambitions to become a regional power. This ambition has encouraged the government to invest in rapid development and infrastructure, but with much less regard to environmental standards.

As known, there is a long history of conflicts over water resources, but in the case of Iran water is becoming another reason of increased regional and international tensions. In 2016 UNESCO released a set of recommendations on Iraqi wetlands and mentioned Iran as the main responsible for the deteriorating the ecosystem of the wetlands[7]. Water mismanagement, in this way, is one of the most common and visible markers of the Regime`s failure to deliver basic services to its citizens and effecting negatively neighboring population.

In addition, water is a convenient political tool, which is strategically used by Iran’s leaders, particularly its Islamic Revolutionary Guards Corps (IRGC), to control ethnic conflicts. As a result, rivers have been dammed across the country to divert water from minority regions to central parts of Iran. A good example of this phenomenon was the diversion of Karoon River from Arab ethnic minority provinces. This action has led to constant unrest and demonstration in the province of Khuzestan[8].

This issue has also an international feature, as three main rivers in Iran, along with its smaller streams, flow to neighbor Iraq at different points in the North East region. In addition, 30 % of Iran’s freshwater is located in the south west, especially in the province of Khuzestan, which borders Iraq and the Arabic Gulf.  But the dynamics of this phenomenon are changing rapidly as Iran continues to build several dams and tunnels, resulting in the dry up of some of the shared rivers between the two countries. The effects of these policies, therefore, are not only local, but also international.

The most recent statistics available show that 647 large and small dams had been built, 146 of which are under construction and 537 studied to be built, which makes a total number  of 1330 dams[9]. All these dams resulted in the drying up of wetlands and lakes, and had major impacts on farmlands, wildlife, especially migratory birds and local inhabitants in Iran and Iraq.

Altogether, the negative effects of water and resource mismanagement in Iran is a result of the country`s disintegrated decision-making and problem-solving.[10] One major cause of such disintegration is the water governance structure, which involves too many stakeholders and an undesirable hierarchy in water resources management, which is controlled by the regime. Water infrastructure, especially dam constructions is after oil the second sector in Iran that receives the highest level of investments. Its aggressive dam-building policy made the country the world’s third-biggest dam builder after China and Japan[11].

Regionally, Turkey has a similar feature of water mismanagement, as the Government builds dams on rivers that enter Iraq and Syria. This method of controlling water makes the region more vulnerable. This also prevents the natural path of water, leading to constant droughts and dry basin of the rivers and lakes, which can become a main source of sand storms. This later phenomenon disrupts the agriculture and even oil production

As for neighbor Afghanistan, the water channels control has led to severe droughts in Baluchistan, the second largest province of Iran. This region was one of Iran’s main producers of wheat, but now farmers have abandoned their lands and emigrated to cities.

In addition, Iran experiences over 500 dust storms annually due to dams that have dried the lakes, marshlands and rivers. There are two major areas that have particularly experienced severe dust storms in the recent years: the border area between Iran and Iraq to the southwest and between Iran and Afghanistan in the east. Those two regions were the located the main agricultural producers of Iran. However, with the continued cycles of drought, sandstorms and flood, most of farmlands have been destroyed, affecting the food security situation.

Corruption and IRGC`s Role in the Environmental Crisis

The economy of Iran, especially the construction and infrastructure sectors, is under the monopoly of institutions such as Khatam-al Anbiya Construction, which is part of IRGC. Hasan Rouhani in his first speech after being elected stated that Iran`s economy is in the hands of whom “are outside the circle of accountability” and the government has no control over them.[12] Khatam-al Anbiya company is also subject to the sanctions imposed by the United States.

According to Transparency International’s annual corruption report, Iran is ranking 138 among 180 countries surveyed.[13] To put this issue into context, some reports have claimed that firms associated with the IRGC have been constantly lobbying consecutive governments in Iran to gain contracts and build disproportionate numbers of dams throughout the country[14], despite the fact that the majority of the dams are not fully operating due to insufficient precipitation.

When checking the online database of Iran's Energy Ministry, most of the data regarding the majority of dams’ projects is missing. Among more than 1,000 dams, only about 100 had complete, yet questionable, information[15].

European decision makers are also aware of the environmental challenges in Iran. As per the Joint Statement by Federica Mogherini and the Iran`s Minister of Foreign Affairs, Mohammad Javad Zarif, environmental issues and climate change have taken place in agreed areas of cooperation, including migration, humanitarian aid and regional issues[16]. With corruption and IRGC influence on Iran’s economy and politics, there will always be uncertainty whether those international aids will be spent on the right place.

Iran’s foreign activities and involvement in a number of conflicts in Middle-East overshadow the environmental issues the country faces. If the situation continues and the developments of catastrophic water policies stay the same, crisis of water scarcity will threaten Iran’s future food and water security. Such sociopolitical pressures are likely to increase, as internal and external displacement will lead to waves of climate refugees across the region and Europe.

The BIC believes that remedial steps are both possible and necessary. While recent geopolitical shifts have seen a deterioration of the country’s economic isolation, to ensure stability and curb the exodus of local communities, the government needs to pursue serious domestic and institutional reforms starting from within. International pressure will remain vital to avoid forced displacement and the rise of climate refugees in the region and Europe.

In this way, the BIC recommends that the government of Iran and the international community, especially the EU, focus their efforts on six urgent priorities: