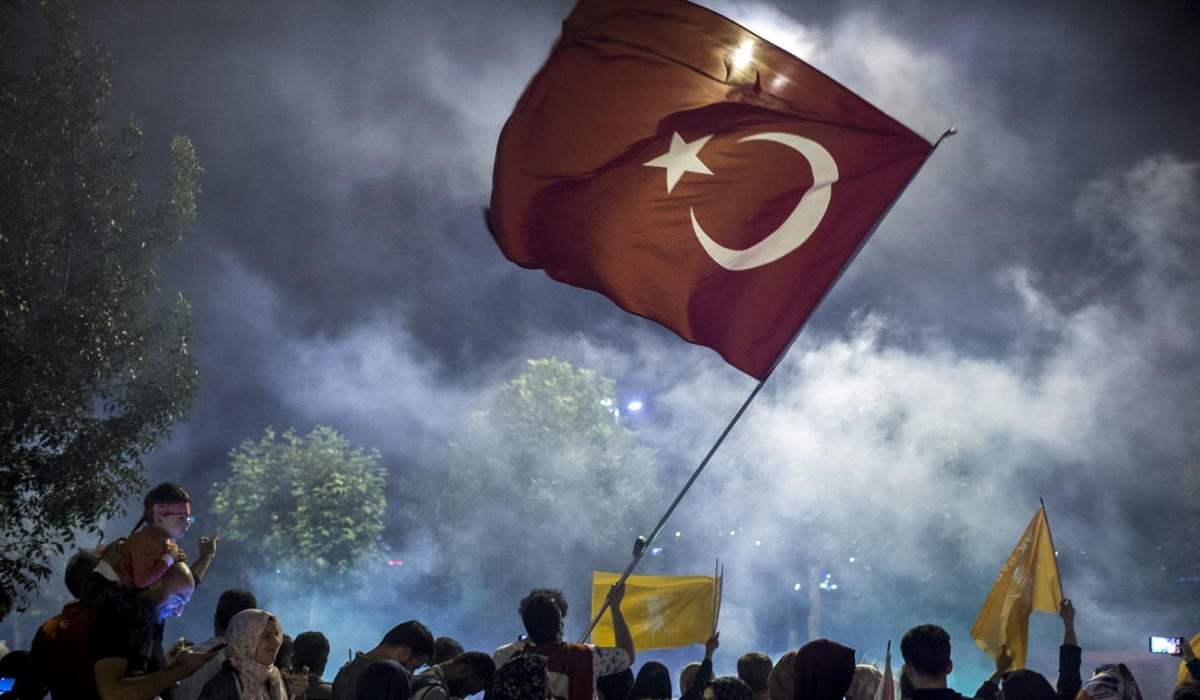 The Justice and Development Party’s, or AKP, has lost the municipal elections of March 2019 in major Turkish cities such as Ankara, Istanbul, and Izmir. In fact, the oppositions’ unity has made President Recep Tayyip Erdoğan’s traditional strategy of ‘divide and conquer’ harder to pull off. It certainly paved the way for a clear victor of Republican People’s Party, or CHP, candidate Ekrem Imamoğlu who overturned years of AKP governance in Istanbul, the biggest Turkish city where 15 million people reside. AKP quickly rejected the defeat, demanded a revote arguing that the March 31 balloting was tainted by irregularities in the vote count and the appointment of ineligible people as ballot officials. The new elections that were held on June 23, 2019 only offered a harsher and a stinging defeat. 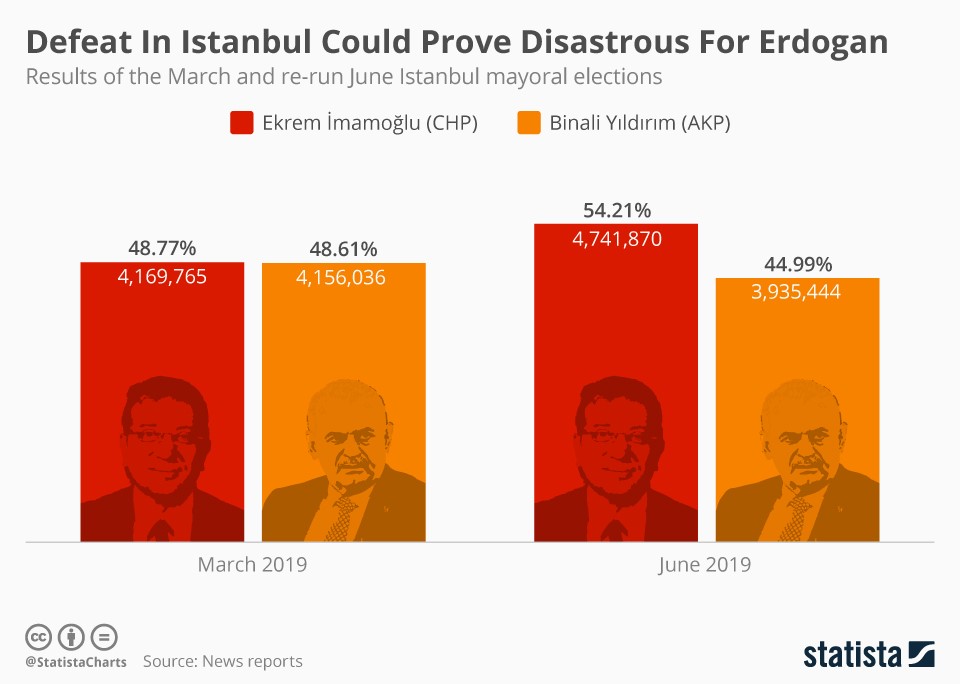 The loss of elections was just the introduction, and apparently AKP is not only losing support from the general population, but elites too. Erdoğan has been alienated by his old comrades including AKP founding-fathers, who decided to leave AKP, while promising to establish new rival political parties. In May 2019, former Prime Minister and AKP leader Ahmet Davutoğlu issued a statement posted on his Facebook page breaking his ties with AKP and signaling his intentions to form a new party. Ahmet Davutoğlu, the well-known figure who advocate the "zero-problems with neighbors" policy and the engineer of the new Ottomanism has criticized the marginalization’s of AKP’s founding-fathers and necessitated radical reforms within the AKP. The Turkish Prime Minster, who believed Turkey was turning increasingly authoritarian, announced his resignation in May 2016 after 20 months in office. “After consultations with the President I decided that it would be more appropriate for the unity of [the AKP] to change the chairman,” Davutoğlu  said.[2]

Following Davutoğlu’s steps, Ali Babacan, one of the very well-known founding fathers of AKP and Turkey’s former economy czar also quit AKP and resigned on July 8, 2019. Babacan stated that: “The current situation necessitated a brand-new vision of future in Turkey because we have new, dynamic, and promising generations that have completely different demands.”[3]  In fact, these resignations are expected to be followed by emergence of a new movement(s) or political party(ies) that will mirror the early golden years of the AKP. While such nascent political bodies may not enjoy an immediate popularity, however, AKP defectors can peel away the regime’s voters in case they run for office, and hence, they remain a premonition for Erdoğan’s rule.

When discussing Turkey’s status as a democracy, in 2018 Turkey was labeled as a ‘hybrid regime’ that occupies the world’s 110th rank, falling far behind its European counterparts.[4] The AKP’s gradual and well-calculated infiltration into the country’s political life consolidated its grasp over power and tackled Turkish aspirations of a prosperous democracy. This was crowned with the 2017 tightly contested referendum in which Turkey departed from a parliamentary system into a one man show with unmatched powers between the hands of Erdoğan. Yet despite the AKP’s promising kick-off in the previous decade, aligned with the party’s version of democracy, social and economic reforms, Turkey’s democratic performance is currently declining. The country’s democratic motion is limited within a context where media outlets are directed by the government and/or its loyalists at best or any signs of opposition are met with a crackdown at worst.[5] Today, Erdoğan has the legal powers to issue decrees, appoint judges, declare war and dissolve parliament with an abolished prime minister office.[6] Erdoğan has, in the short term, eliminated Turkey’s dreams of achieving democracy in favor of enjoying uncontested powers in a manner that facilitates his struggles to clip the wings of any signs of opposition in the country.

Since 1950, Turkey has been a signatory to the European Convention on Human (ECHR) Rights. Under international law, Turkey is therefore obligated to comply with the rights and freedoms set out in the convention. However, Turkey’s time as a signatory to the convention has been tumultuous and they hold the lead for the country with the most violations to the convention, at over 3,100 violations.[7] Erdoğan’s assault on democracy has extended beyond his desires to depose those who contradict him. These violations represent the blatant disregard that the Turkish government has for human rights within their borders. Following the attempted coup d’état in 2016, the Turkish government announced its plans to officially deviate from the ECHR, although they are still a member to the ECHR.[8] In regards to human rights in Turkey today, Erdoğan has unlawfully arrested and detained over 77,000 people since 2016 on the charges of terrorism, including journalists, civil servants, teachers, politicians, and disloyal police and military officials.[9] These detentions follow a series of other human rights violations, which are not only inhumane, but contravene international law.

Most recently, in August 2019, 200 military  personnel who were suspected of having links to the attempted coup three years ago were arrested.[10] Others who were suspected of playing a role in the failed coup have simply been dismissed from their position without notice or explanation. The hundreds of thousands of individuals who have fallen victim to Erdoğan’s dogmatic decisions, represent only one of many different mechanisms instilled by the Turkish government, which ultimately demonstrate the increasingly volatile political atmosphere that is Erdoğan’s dictatorship. Under these harsh conditions, Erdoğan appears as a dictator standing alone and tightening his grip on Turkey, and his responses appear to be of a huge impact on democracy, institutions, and the overall rule of law in Turkey.

Brussels International Center (BIC) believes that the internal cleavages of the AKP Party will continue to contribute to the growing instability within the country by continuing to battle with other political parties. The European Union must ensure that Turkey is redirected to the path of democracy and human rights.

6 “What Powers Will Turkey’s Erdogan Have at His Disposal after Winning Re-Election as President?,” The Independent, June 25, 2018, https://www.independent.co.uk/news/world/middle-east/recep-erdogan-turkey-what-powers-election-referendum-executive-president-a8415756.html.